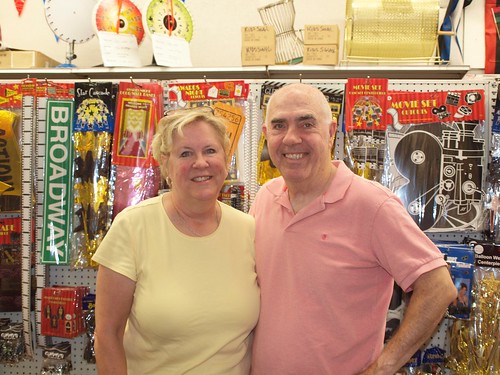 Originally an equipment rental company, Chicago business has evolved over its 54 years in operation

“It was kind of rough on him,” Dan Doolin told the Chicago Tribune when his father died in 2005. “He had committed to buying the company and then his wife dies.”

John Doolin pushed on, and in doing so set the tone for what’s been a 54-year journey of adaptation and evolution for the business, now led by Dan Doolin and his wife, Christine.

What started as a delivery operation that supplied churches and civic groups with carnival equipment to throw fundraisers — which it still does — has grown into a brick-and-mortar party supply store in the Windy City’s River West neighborhood. Originally, the store’s location on N. Halsted Street was more a place for equipment storage rather than retail, as the area saw little foot traffic and was populated with transient hotels.

“Now, it has become a very popular part of the city, although (with) heavy traffic (and) limited parking,” Christine Doolin said. “Mostly, we are a business-to-business destination, but when Friday and Saturday come, many people are calling or coming in to get their own personal home party items. During the week, we take calls from businesses, schools and universities for their special events and even workout center chains or private clubs that need helium or balloon deliveries for their annual or weekly events.”

Equipment rental delivery and pickup is still a big part of the business, which Dan tends to focus on, although the retail operation, more of the focus of Christine, continues to blossom. Doolin’s also offers delivery to its retail customers, including home delivery.

“We take down seasonal sections although some sell year-round like patriotic, Hollywood awards night theme and a few others,” Christine Doolin said. “The big seasons for us would be New Year’s Eve, Valentine’s (Day), St. Patrick’s (Day), Mardi Gras, luau, Oktoberfest, Halloween, Thanksgiving and Christmas. We also have spurts depending on what is happening. After 9/11, we sold through tons of American flags; now we are selling Olympic-themed things of course and patriotic!

“In addition to the charitable gaming, we pride ourselves in helping groups find seasonal decorations very inexpensively to establish a theme for their fundraising events,” she added.

Dan Doolin was 12 years old when his father bought the business and his mother died. John Doolin wasted no time in making his youngest boy a shop helper, instilling a strong a work ethic that still permeates throughout the company.

“Our team works with a cooperative spirit. Dan sets the pace by example and always has!” Christine Doolin said. “Being the youngest, he was brought to work — even on Sundays — and especially during summer carnival season. He often laughs and says he was down here at the age of 12 cleaning toilets. On any given day, we still might find him cleaning rental chairs in the warehouse or sweeping a floor. There is no job that he won’t do nor would ask anyone else to do instead.”

Dan and Christine’s sons, Nick and Mike, also work for the business. Nick, a former IBM employee, helps with technological aspects of running a modern-day business, while Mike handles inventory and helps with delivery.

“We have many long-term employees who we enjoy having on board,” Christine Doolin said. “We offer good compensation, health insurance and pension plans, and I think they like working in an easy environment where everyone takes ownership in their own domain and part of the whole picture.”