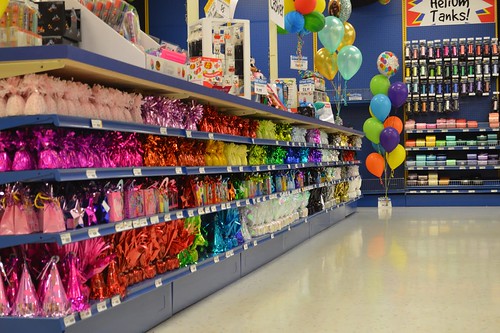 It was a case of opportunity meeting need in Michelle and Reed Chambers’ journey to becoming party-store owners.

Wanting to break into retail in a growing area of Georgia nearly a decade ago, the Chambers became a Party America franchisee and opened a store in newly built shopping center that also includes a Target. It’s in a high-traffic area of Acworth, which has doubled in population since the turn of the century. Acworth’s growth is a result of the ever-expanding Atlanta metropolitan area.

The Chambers felt the area lacked what a full-service party store could provide, so they pounced on it.

“We both have a fast-food background, Reed in finance and me in operations,” Michelle Chambers said. “There was a lot of retail growth in our area, and knowing we wanted to move away from the food industry, we looked to see what retail concept was not in the area.”

At nearly 10,000 square feet, the Chambers have no shortage of retail space. They take full advantage by stocking the latest licensed costumes and balloons, as well as supplies for any sort of celebration or event one can imagine.

The Chambers’ tenure as a Party America franchisee was somewhat short-lived, as Party City acquired the company a year and a half after the store opened. The Chambers were a Party City franchisee for a year before going independent in 2009.

“They tend to want you to have multiple stores, and that wasn’t going to be an option for us,” Michelle Chambers said. “There was already a big franchisee in Atlanta.” They kept the Party America name for customer familiarity and branding purposes.

Chambers spoke with Party & Paper Retailer about her operation, including the difference between being a franchisee and independent.

PPR: How many products do you carry?

MC: We carry approximately 20,000 different products. We also have 500 helium tanks, which we rent and we have a huge balloon inventory for selling in store and onsite event decorating. We also have two delivery vans for helium and balloon deliveries.

PPR: What are your biggest sellers by categories?

MC: Balloons — in store and on location decorating — helium tank rentals, costumes and accessories and party supplies, both licensed and solid color.

PPR: Where do you typically look for or find new products?

MC: At the Paper First Affiliates Tradeshow, the Halloween Show, in Vendor catalogs, at the Atlanta Mart or from other party-store operators.

PPR: How would you describe your clientele’s tastes?

MC: Most of our customers are looking for current trends they’ve seen on social media sites, such as Pinterest, or at an event they’ve attended. Kids are looking for licenses they see in video games or on TV, currently Pokemon, Shopkins and Paw Patrol.

PPR: What are the benefits of being independent?

MC: You get to choose your own product mix, rather than having to follow what the franchisor dictates you carry. As an independent, we know what’s going to sell in our area. That’s the biggest thing, and not having to pay a franchisor fees.

PPR: Is there anything you miss about being a franchisee?

MC: You get a lot better pricing from the vendors. But being part of (buying group) Paper First Affiliates has helped with that aspect.

PPR: What is the most fulfilling thing about running the store?

MC: Customers getting excited about custom items we have designed for them (i.e. invitations, banners and balloon décor).

PPR: How about the most challenging?

MC: We try to keep an upbeat, fun atmosphere in our store and sometimes customer’s moods and attitudes don’t match ours. Sometimes you can’t please everybody, but we try.

PPR: What is the most unusual request you’ve gotten from a customer?