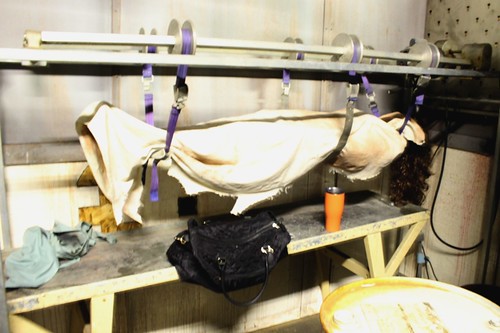 Going behind the scenes at haunted attraction

Leslie is a quiet rural community in mid-Michigan that could suffice as a setting for a future “Children of the Corn” reboot. It’s isolated enough to stay calm and peaceful, yet easily drivable from medium-sized cities Lansing and Jackson.

In other words, Leslie is a good spot for a haunted attraction. Rob Robinson thought his property on the outskirts of town, which has the look of a one-time used car dealership surrounded by farmland, would make a great setting for one.

In 2016, Robinson collaborated with Brian McVay, a graphic designer by day, to open Awaken.

A haunted attraction wasn’t completely out of left field for Robinson, who owns discountpartysupplies.com, although the amount of time and effort that goes into creating a decent haunted house may have been a bit of a surprise.

“To be honest, this isn’t a business I would recommend for everyone,” Robinson said. Fortunately for Robinson, he hooked up with the right kind of people, led by McVay, an accomplished makeup artist with seven years of experience working at haunted attractions, not to mention folks who know a thing or two about electrical work, lighting and welding — all necessary components of creating a good haunted house.

What exactly goes into a creating a haunted attraction? Where do they get their props and costumes?

For McVay, Robinson and many other serious haunters, it often means becoming something of a scavenger. McVay and his crew were collecting discarded items to use or repurpose well before they even had a location.

“When we realized we were going to this, we started looking everywhere,” McVay recalled. “It was everywhere from garage sales to friends and families’ basements.”

One of McVay’s graphic design clients happened to be a funeral home, which he called a stroke of luck. “They hadn’t cleaned out their attic in 30 years and said, ‘Hey, come on up and get anything you want.’ That set a bunch of our room props right there.”

Like many attractions, Awaken changes things up each season to create a fresh experience. In 2017, it was an old, decrepit hotel set in an abandon town littered with dead and undead beings.

“One of things we’re good at, the props and scares are outstanding,” Robinson said. “In my mind, it packs a lot of punch. It’s not super long yet; next year we’re going to extend it.”

Scare seekers tend not to be afraid when they’ve already seen something, so the haunter’s task is to create props and scenery that’s unique. That means creating their own props by enhancing base products or making from scratch using raw materials.

“The only time we ever get anything from a store is like some sort of weird prop as something that we can build upon,” McVay said. “For instance, we have all these decaying cats. They’re actually those cheap skeleton cats you can get at Target, but we rework them, cut them, bend them up, put real hair on them and we make our own fake cats. … We do buy stuff at the box stores to build light kits and things like that.

With as handy as the crew at Awaken is, that’s usually the case, but not always. Robinson noted it’s sometimes easier, if not necessary, to purchase ready-made items, like fog machines or 3-D glasses. Awaken bought a mess of the latter to go with 3-D murals a specialty painter came in and did.

Then there is the business of dressing and prepping the actors, which has to be done each night. That includes costumes, often made through a collection of accessories and old clothes, wigs, masks and makeup — lots of makeup, body paint and fake blood.

Awaken strives for movie-quality appearances for its actors and typically opts for higher-end products. “We look to the special-effects places,” McVay said. “We don’t usually go at your local Halloween place. The only thing we might buy is fake blood that we’re going to use a ton of by throwing it everywhere because it’s cheap. You can buy a $6 or $7 jug of fake blood versus a $30 bottle you are going to put on the actor.”

The crew at Awaken buys most of its makeup, body paint and adhesives online for no other reason that they’re not available within a reasonable driving distance, as the staff hasn’t found supplier closer than 100 miles away.

Awaken has purchased masks, but McVay said they create their own when “there is time.” He added every attraction is different, depending on the level of devotion and money organizers are willing to put into it. Also, each has its own vision and style. “It’s hard to find what works sometimes,” he said. “Every haunt has a different look and feel to what they want.”