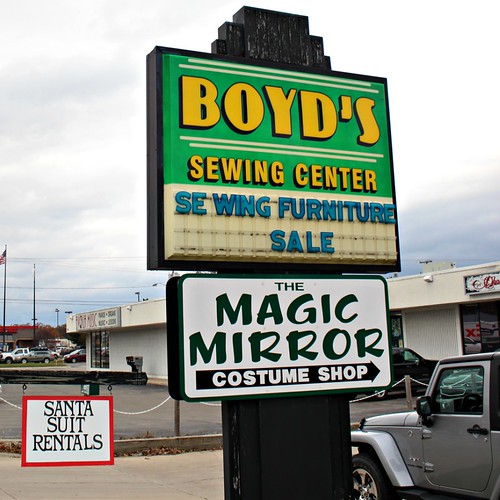 Costuming isn’t the same as it was 20 years ago, and Kathy Foote surely isn’t running her costume shop as if that were the case.

Just prior to Halloween 2016, Kathy Foote and her husband, Frank, bought the Magic Mirror Costume Shop in Traverse City, Michigan, which has been in business for two decades.

Like many costume rental businesses, the Magic Mirror had a rapport with community and school theater groups, something the Footes are working hard to re-establish. They are also connecting with folks who aren’t dressing up because of a part in a play, but simply because they love doing it — Cosplayers — a demographic the Footes know quite a bit about, as their son, Devin, 22, has been an avid Cosplayer and costume maker for several years.

“The makeup and definitely the wigs are things more geared toward the Cosplay crowd because, let’s face it, they make their own costumes,” Kathy Foote said. “We really needed to focus on finding another demographic for more year-round and different sales. Makeup, wigs and being able to special order boots or gloves or whatever they need to round out the costume they’re making.”

That includes expanding the makeup and wig selection and adding materials needed to make body enhancements or props, like high-end latex, moldable plastics and adhesives. Many of the products the Magic Mirror is starting to stock are typically only available online or in major cities.

“We’re going to be working with Arda (wigs), and we’re also going to be able to carry Worbla (a thermoplastic often used for special effects and by Cosplayers),” Foote said. “We want to be able to cater to that group, where they can come in and say, ‘I need Worbla to complete this look and I can’t wait for it to be shipped.’”

Community outreach was number one on Foote’s agenda. Although Traverse City’s population is only about 15,000, it is a destination location as the cultural hub of northern Michigan, giving Foote plenty of people to connect with, and Foote is using all mediums, including word of mouth, social media and advertising.

“I feel like we’re a little Ann Arbor of the north. Our community is very big into arts and culture,” Foote said. “We have wineries and breweries and cideries now. We have a fantastic community playhouse and we have the State Theatre and they do a lot of great events. Of course, we have the Cherry Festival, which is huge up here. A lot of people come up here and there is always a lot to do, and there is a lot of small community businesses starting all the time.”

Her list included high school and community theater groups, both in Traverse City and outlying communities, and she put a big emphasis on the Cherry Capital Comic Con, which takes place every Memorial Day weekend.

“That was a priority for was to connect and get involved with that comic con,” Foote said. “We became a sponsor (in 2017), but we also had a vendor booth. We had all of our makeup, wigs and products there. We were like, ‘Hey, we’re local,’ and people were shocked there was a store nearby where they could get these items.”

One of the Footes’ ideas for the Magic Mirror was to offer how-to makeup classes. They reached out to SFX makeup artist Nicole R. Enger, a longtime customer of the store, about instructing the classes using Ben Nye brand and other products. Foote used the booth at the Cherry Capital Comic Con as a way to gauge interest. The response was overwhelming. The Magic Mirror has offered two classes to date, with more in the works.

"The classes get people in there using the product, getting familiar with the product so we’re developing a more year-round clientele that are coming in for the makeup,” Foote said. “Some people want us to do a theater makeup class, where the kids are coming in to learn. Our high schools are extremely active (with stage productions).

“The schools have drifted away from utilizing Magic Mirror as a resource and makeup source and we’re working hard to re-establish that.”

The Magic Mirror has also gotten involved by offering free costume rental to local charitable organizations that might be in need of a Santa outfit, for example. Foote realizes such acts are good PR, but her primary goal is to deepen her store’s roots in its community.

“This community is very big on buying local and keeping things local,” Foote said. “I’m getting the word back out that there is a local resource for the makeup and people are starting to come in.”

RELATED: Tips from a make-up pro

LARP, which stands for live action role-playing, is a growing hobby that takes Cosplay to another level.

“With Cosplayers, they generally recreate a favorite character, whereas LARPers create their own character,” Foote explained. “Much to my surprise, we have a very active LARP group in Traverse City.” Foote told a story of a gentleman who came in to purchase some Ben Nye makeup for his character, which Foote asked about. “He came in a couple of weeks later with his daughter and I said, ‘I can’t remember your name, but I know you’re an Orc,’” Foote said, with a laugh. “He liked that.”

Frank Foote is an avid collector and seller of animatronics and props, which have a significant presence at the Magic Mirror. He primarily sells items online, but the family’s knowledge, son Devin included, of that industry as well as Cosplay and costuming has been a real asset.

“That helps and makes them unique,” said Nicole Enger, who has been shopping the Magic Mirror since it opened 20 years ago. “You can’t go into very many Halloween stores and rental shops and say, ‘Hey, I’m trying to make this,’ and there is this kid who is making his own costumes and repairs them.

“The whole family knows all that stuff.”

For the Magic Mirror to become what the Footes envision it being, they recognize the need for a larger, better-located retail space. The store is hidden in the rear end of a commercial building. While there is some signage near the street, which does see plenty of traffic, the business is easy to miss. The plan is to change locations in May 2019, when their current lease is up, and grow the clientele as much as possible up until then.

While Foote said the subsequent move with “make or break us,” she sees vast opportunity to grow the business and become a costuming hub for northern Michigan, not just for products but also for networking and knowledge.

“We get to know the people that are doing these things, and we’re not just doing it as a retail source but by attending their events and seeing them in their costumes. We really appreciate what they’re doing,” Foote said. “I’m exited to see what’s happening and it’s fantastic to be part of it.”